The store will not work correctly in the case when cookies are disabled.

The story of Adidas started off in the wash kitchen of Adi Dassler’s mother. That is where he started the company ‘Gebrüder Dassler Schuhfabrik’ with his brother in 1924 with the mission to provide athletes with the best equipment. It started off great, in fact, Lina Radke won the gold medal in the Olympic games with Dassler shoes just 4 years after the company had started. 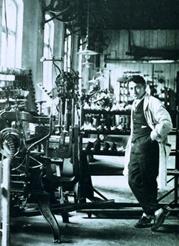 Adi Dassler in one of his earlier factories

In 1949 Adi Dassler parted ways with his brother and started ‘Adi Dassler adidas Sportschuhfabrik’. He set to work with 47 employees in the town of Herzogenaurach.

In the same year, he sold the first shoes with the now famous Adidas 3-stripes. In 1954, the german team won the world cup wearing Adidas shoes, and this gave Adidas a lot of popularity around the world.In 1967, Adidas launched the Adidas tracksuit. This was the first of many items in their collection that was not a shoe. 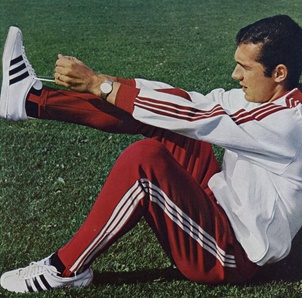 One of the first Adidas tracksuits

In 1978 Adi Dassler died at the age of 77. The flourishing company he left behind was taken over by his son. When his son suddenly died in 1987, Adidas became a stock corporation and was nearly brought into bankruptcy. However, Roberrt Louis-Dreyfus, the new appointed CEO turned Adidas into a marketing-giant.

In 2001, the new CEO Herbert Hainer turned his attention to innovation. The focus of Adidas lay in making the fastest shoes possible. This is where their 3c’s culture comes forward. They believe that the combination of creativity, collaboration and confidence can create the best products.

Confidence causes them to take risks and try new things. Even if they fail, it is a part of their learning process. Their confidence helps them improve. Collaboration means that they trust in each other's abilities and talents. Together you can reach more than on your own. Creativity helps them stand out. No one succeeds by copying their predecessor, but rather by being open to new ideas, explore the boundaries.

Adidas Rackets: Adidas makes great rackets. Thanks to the different series and the various prices, every player is able to find a good Adidas racket.

Adidas Shuttlecocks: The Adidas FS1 shuttles are often used as a training shuttle. At a pricepoint of 13,50 euros, you can get yourself some decent feather shuttles. If you want shuttles with higher quality, you can get some of the more expensive shuttlecocks. Because they are made out of better material, the shuttles are more durable and give the best flight.

Adidas Bags: Adidas’ bags are designed to both keep your belongings safe ánd to look good. They offer a 6-racket bag for the casual player, or a 9-racket bag or tournament bag for the more active players.

Adidas Sportswear: Adidas offers the full range of clothing that you need in your wardrobe. You can find sportswear for your workout, your tournaments, and spare time. These days, the line between sportswear and daily apparel is often blurry. You can wear the Adidas clothing wherever you want, when you want because of the sporty look.

Looking for a super deal? Find the Best Deals here!